10 Years Later – BTC Has Failed to Achieve Its Original Goal 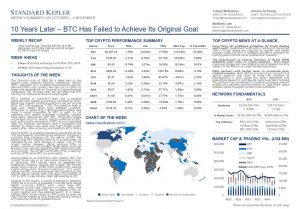 The financial crisis of 2008 left a deep dent in the public’s trust towards financial institutions. Bitcoin (BTC), designed as a trustless decentralized peer-to-peer electronic cash system, was seen as an option to lessen the dependence on financial and governmental institutions. Yet 10 years later we can state that BTC has thus far failed to achieve its original goal.

BTC’s inability to transform itself into a scalable electronic cash system is a primary contributing factor. While Visa supports 24,000 transactions (tx) per second (TPS), BTC only processes 7 TPS. This leads to high tx fees, and makes large scale adoption unviable. Difficulties in governing a decentralized system has made it nearly impossible for BTC to reach its full potential, and several proposed scalability updates have been abandoned with BTC remaining largely unchanged since its launch. Factors external to BTC, such as the public perception of BTC as an unregulated high risk financial instrument, with a reputation still tainted by illegal use cases and high profile crypto wallet hacks, have certainly contributed to BTC’s failure.

Assuming BTC is scalable, regulations would still be the first step towards promoting real adoption. Yet there is currently little consensus on the nature of BTC. We believe that BTC exhibits features of a commodity, as indicated by its “safe storage of value” role in the crypto market. However, global opinions differ as shown in the Chart of the Week. While HKMA chairman Norman Chan recently stated that BTC does not qualify as a currency, the US SEC claims BTC is not a security, and the CFTC claims BTC is a commodity.

Having failed as an electronic cash system, BTC has instead found use as an alternative investment class. In particular, BTC futures serve as gateways for traditional investors tapping into crypto. We further expect that a launch of BTC ETFs could bring massive capital inflow from financial institutions. It is worth noting that BTC has recently been less volatile than the bearish equity market, with a ten day price volatility of 15.7 for BTC in late October (S&P 500 volatility at 27).

Looking to the future, a crucial challenge to adoption of BTC as a currency is expected in central bank issued digital currencies (CBDC) which could make BTC irrelevant to the vast majority of users. India, the world’s 5th largest economy, has proposed a ban on crypto trading and the possible launch of a rupee-backed CBDC. As we reflect on BTC’s past 10 years we may find its inability to truly break the public’s reliance on institutions to be its greatest failure.