51% Attack on ETC Should Trigger Death of PoW Chains

Public attention should be redirected from the relatively insignificant upcoming ETH Constantinople update towards the recent 51% attack on the Ethereum Classic (ETC) blockchain. The attack was detected when a series of deep chain reorganizations  containing double spend transactions was found.

Consensus algorithms define the governance of blockchain protocols and eliminate the need for third party intervention in managing blockchains. They also determine how block confirmations are carried out on the blockchain, thus ensuring the integrity of data on the blockchain. A blockchain that suffers from a 51% attack lacks sufficient decentralization of miners, and is thus largely worthless.

The price of ETC has remained relatively stable despite the attack. It is likely that ETC is primarily traded by speculators who fail to recognize the significance of a 51% attack, from say a wallet hack. One may also speculate that ETC price is manipulated to create a semblance of stability. This is a possibility that cannot be discounted given the typically centralized ownership of cryptocurrency, and the fact that crypto trading remains largely unregulated.

We believe the 51% attack should significantly dampen any public trust in ETC in the short term. Such an attack can in the long term present a vicious cycle to the crypto ecosystem. 51% attacks dampen trust in public PoW blockchains, leading to the exit of miners and users. The exit from miners leads to lessened competition and costs in mining, making the blockchain further vulnerable to 51% attacks, leading to further price drops.

It is worth noting the hourly cost to launch a 51% attack on ETC is only US$ 4293, as noted in our Chart of the Week. Meanwhile, Bitcoin (BTC) remains relatively decentralized and is thus unlikely to suffer from 51% attacks. Assuming an electricity cost of US$ 0.05 per kilowatt, Bitstamp estimates the daily electricity cost of launching 51% attack on BTC at US$ 5.5mn, to which the massive cost of acquiring mining equipment must be added.

We believe this attack to be significant, as it indicates a further deviation from Satoshi’s vision for public chains, and it may signal what is yet to come. We can foresee users will leave PoW chains for PoS public chains, and further 51% attacks within the crypto top 20 could push users towards permissioned chains. 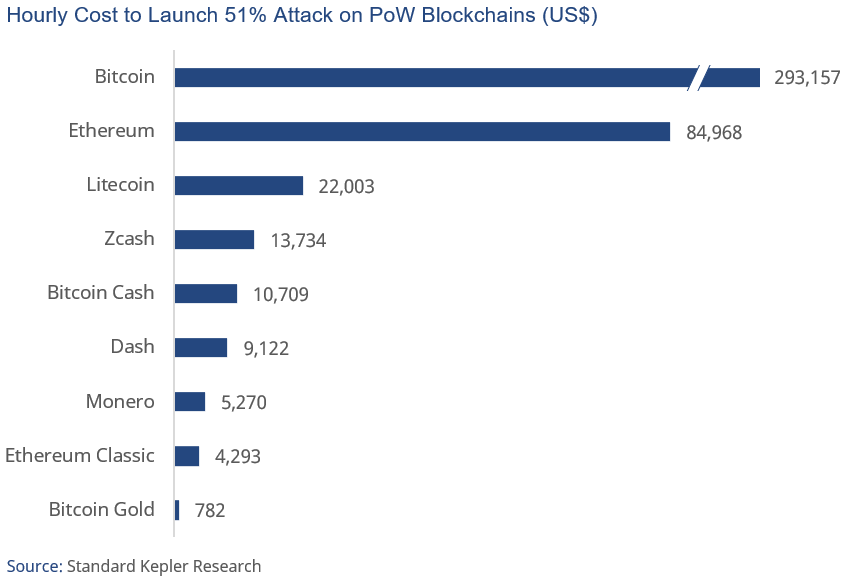