Central Bank Digital Currency (CBDC) driven Retail Payment Systems (RPS) have been proposed as solutions to a number of problems. Some of these problems are related to the costs of using cash, and some are related to a lack of cash. Note that CBDC RPS can be designed without DLT, and DLT is just one possible underlying database infrastructure for such systems.

In scenario A, some countries have considered CBDC RPS as a way to reduce the usage of cash. The goal being to reduce the financial and environmental costs associated with handling cash, as well as the black economies which are facilitated by cash. In scenario B, countries such as Sweden have in recent years seen drastic reductions in cash usage. Cash currently constitutes just over 1% of GDP in Sweden, compared to the European average of 10% of GDP. Half of Swedish retailers further expect they will stop accepting cash by 2025 at the latest. Central banks fear that such reductions in cash usage and cash supply can lead to difficulties for the public to gain access to central bank risk-free money and increased consolidation in the financial infrastructure among private digital retail payment systems. This in turn could lead to a more inefficient and vulnerable payment market, with decreased trust in the monetary payment system.

CBDC RPS are conceived as a solution to the above two scenarios. A “digital dollar” platform could allow the public to hold digital dollars issued and guaranteed by the central bank. The platform would interface with users (via internet, card, IoT, etc.), settlement systems, internal support systems, and external systems such as ATM companies and payment service providers. The costs associated with such digital dollars would likely be small in comparison to the handling costs of physical dollars, and digital dollars could provide central banks with the traceability to limit black markets. Digital dollars would also provide the public with a guaranteed RPS that (unlike most existing RPS) is not run by private actors.

There are two primary approaches towards designing a CBDC RPS. It may be account-based (held in an account with the central bank) or value-based (stored in an app or on a card). Both require an underlying register that keeps track of transactions and ownership, meaning that usage is traceable. DLT has been considers as a possible choice, but “from a purely technical point of view, [the Swedish Central Bank] can see nothing at this point in time that would prevent an e-krona solution built around a central register.”

Expect CBDC RPS to attract more attention in the future, although primarily in niche markets where cash usage is low (most countries still see significant cash usage, a notable example being the USA), or where there are significant black markets in existence. There are still important decisions to make in the design of an RPS: Should the digital dollar carry interest? Should it be account- or value-based? A digital dollar could make bank runs easier. Is such ease desirable or not? Strong demand for digital dollars (especially interest-bearing dollars) could also drain commercial banks, leading to a reduced ability to issue credit. These decisions would result in a new set of potential risks to the financial system that have to be carefully evaluated. For now, a value-based non-interest bearing dollar seems to be the most likely proof-of-concept candidate. To quote a Deutsche Bank report from 2018, “a compelling reason for consumers to switch voluntarily to crypto euros is hard to see – at least for the time being.” 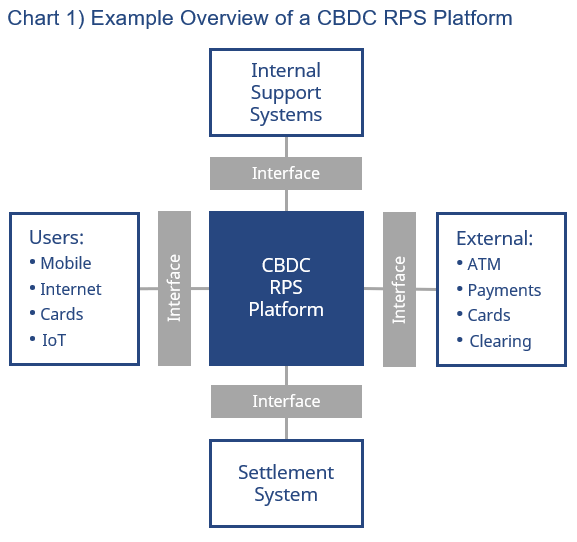