Winter or Doomsday for the Crypto Market?

The sector is experiencing a particularly cold winter，with the total market cap shrinking US$700bn since the January all time high. ROIs are also down, with fund Pantera Capital losing an estimated 73% on their crypto portfolio in 2018. BTC miners are further hit, with profitability falling from US$3.1 to 0.1 per TH/S, and ~800,000 BTC-miners have exited since mid-November. The winter has also reached other ecosystem actors, with Steemit, Consensys, Zeniex and ETCDEV all announcing cuts or ceased operations.

We view the above market correction a result of a busted ICO bubble, and the cleaning out of speculators and dubious market actors. The market cap shrinks as there is currently little value to sustain prices without the influx of fresh money via ICOs. There is also an increased market awareness as to the weaknesses of public blockchains and the now apparent flaws of ICOs as fundraising tools. ICOs have come to present an inherent misalignment of interest between investors and project creators, as they do not provide investor with a right to future business earnings. In fact, the listing of a project on a significant exchange is a major exit opportunity for project creators, thus removing much of their incentive to deliver long term value. Increased regulations could serve as alternative incentive, but would also erode the straight-forward nature that initially propelled ICOs to popularity.

Several much hyped projects are expected to begin secondary market trading in 2019, including Telegram and Filecoin. We expect these to create another sell-off, or for these projects to delay exchange listings until the general market sentiment turns. Also expect regulations around ICOs to intensify, with the U.S. SEC stressing that all ICOs are securities unless they achieve a sufficient degree of decentralization. We estimate that ~60% of ICOs are in fact centralized as their associated smart contracts can be modified by a central party. Potential fines have triggered the exiting of dubious ICO projects, and expect to see authorities pursue dubious projects & associated spokespersons who looked to cash in on the ICO bubble.

We fundamentally do not view ICOs as sustainable fundraising tools, and several high profile ICOs have failed to deliver products (see the chart of the week). Expect the market to adjust further as fresh money stops flowing in via ICOs. We do not however view this as the death of blockchain. Rather, we view this as a failed experiment in fundraising, a realization that the value of public chains is still low and unproven, and an opportunity to reflect on the true value of blockchain. 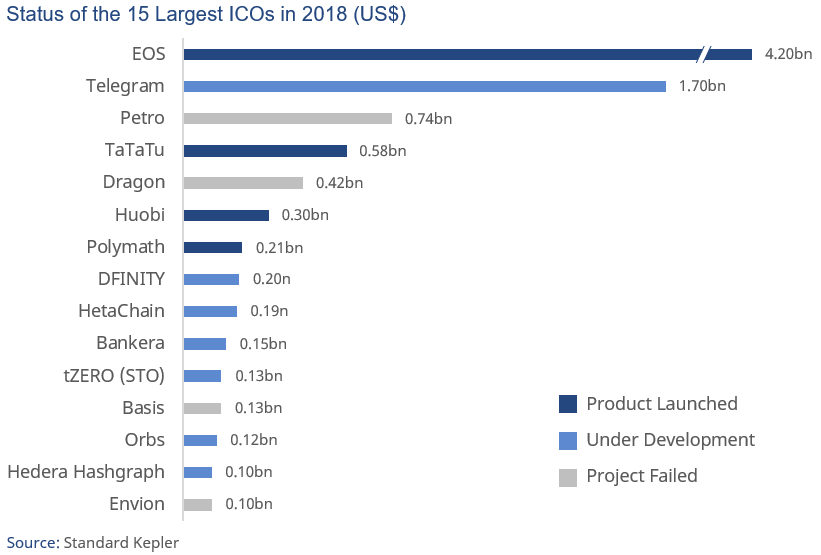